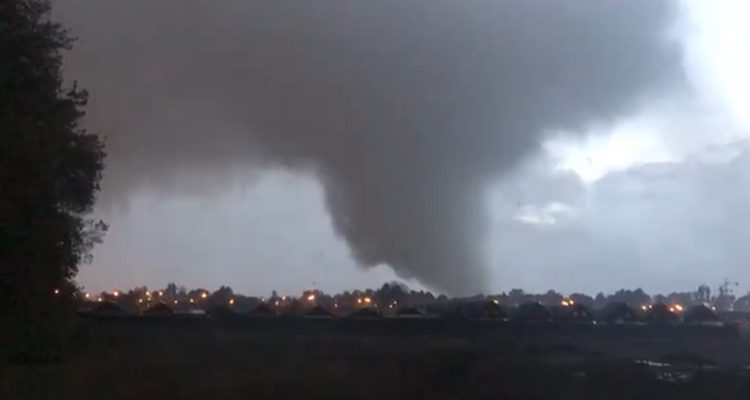 This Thursday night, a tornado swept through the northwest of Los Ángeles (Bío Bío region), a city in the south of Chile. It caused huge devastation, destroyed 22 homes and injured 18 people.

Bío Bío governor, Sergio Giacaman, confirmed the number of damaged homes as well as the amount of people admitted to hospital, which includes a 10-year-old boy and a pregnant 17-year-old teenager.

Before the first official emergency management committee, the local chief of the National Emergency Office (Onemi, in Spanish), Carolina Zambrano, had said that only six people required medical attention.

Los Ángeles mayor, Esteban Krause, said that the tornado affected “a number of blocks, cars, houses that were damaged” and that even some light posts fell due to the storm.

President Sebastián Piñera took to Twitter to send his thoughts to those suffering. The head of State, a conservative billionaire, affirmed the Government is already organising the delivery of aid for the area.

According to neighbours, the tornado was preceded by giant hailstones and strong winds. It also caused traffic disruptions and it damaged power lines, which led to a blackout that affected 12 thousand clients.

In light of this, Friday classes were cancelled at public, voucher and private schools.

Earthquakes, but not tornadoes

Chile is known for its earthquakes, but not particularly because of its tornadoes.

Nevertheless, according to academics, these can occur every five years.

The last one was registered on 31 May 2013 in the city of San Carlos, Ñuble region.

It was rated an F2 on the Enhanced Fujita scale, with winds that reached 228 kilometers per hour. It damaged 47 houses, left 232 people affected, and it injured other two.

However, in May 1934, Concepción, capital city of the Bío Bío region, saw the deadliest tornado recorded on Chilean soil, which killed 27 people.

Carlos Flores lived in one of the houses over which the phenomenon is said to have allegedly started this Thursday night.

He said to Radio Bío Bío that he was with his wife and their two children when everything started to shake.

“It was horrible, it was a dreadful feeling, we thought the world was going to end. We all hugged, we were all very scared”, he told journalists.

He also assured that his car ended up between five and seven meters away from his house. Also, his roof collapsed, so four rooms were flooded.