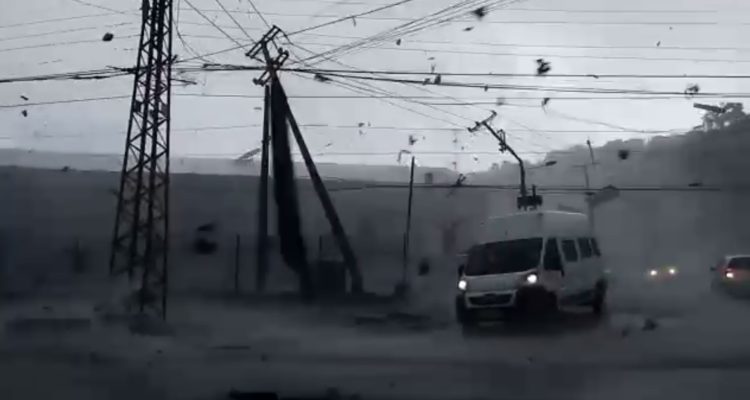 This Friday afternoon, a waterspout left a path of chaos and destruction in some areas of Greater Concepción, Chile’s second biggest city.

Also, eight people were injured and one other died, Bío Bío governor, Sergio Giacaman, confirmed. The victim was identified as a 70-year-old business manager.

According to reports, pictures and videos, gusts reached over 100 kilómeters per hour and torn down trees and power lines.

CGE electricity company estimated that approximately 50 thousand clients were affected because of the blackout, including Las Higueras Hospital in Talcahuano, one of the largest health facilities in the area.

Talcahuano mayor, Henry Campos, affirmed the most affected area was Brisas del Sol, where a casino is located. Winds stripped off parts of the building’s facade.

Also located nearby, portions of the roof at Mallplaza Trébol, a shopping center, collapsed. The administration decided to close for the day.

In Concepción, the police patrolled the city center after trees fell on top of cars and debris was piled up on the streets.

Due to the aforementioned, most universities and schools cancelled classes for the day.

President Sebastián Piñera also made changes to his schedule and announced a last-minute trip to Concepción along with the Home secretary, Andrés Chadwick, one day before his public address before Congress.

But after hitting Concepción, the storm moved towards the northeast into the Ñuble region. Chile’s Weather Service issued an alarm to those leaving in and nearby the city of Chillán.

This happened just hours after a tornado ripped through Los Ángeles, a city located to the south east of Concepción.

18 were injured, 22 homes were damaged and 12 thousand clients had no electricity for some hours.