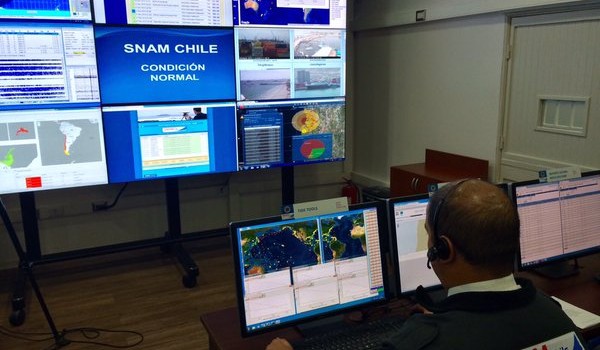 As an important advance in matters of security in case of natural disasters and also as an example in South America has been outlined the National Tsunami Alerts System (SNAM), which has inaugurated its new installations. The event counted with the presence of the Defense minister, José Antonio Gómez.

Four buoys in order to protect the most vulnerable zones of the country from Iquique to Constitucion, the capacity of detecting variations of a centimeter in the Sea and a simulation system of natural disasters like quakes and tsunamis, designed by Universities of the area, are some of the main qualities that make the SNAM as a referent in the matter.

The information was provided by the SHOA’s director, the rear admiral Patricio Carrasco, who assured that will be evaluated the instalation of more devices in the Sea, as part of the own sofistication of the protocol of improvement of the service.

The defense minister highlighted the advances experienced by the SHOA since 2010, specifying the importance of this system considering that a variation of 30 or 50 cm of the sea’s levels would signify a risk.

The minister assured that all the needed resources in order to strenghten the security of the citizen will be invested.