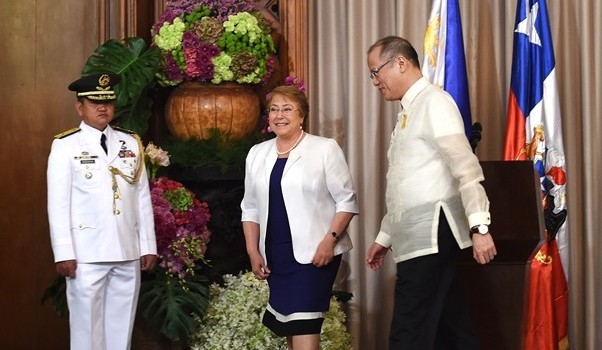 The president Michelle Bachelet, signed an accord to begin since 2016 the studying of a free trade agreement with the Philippines, country which has more than 100 million of population density.

The combined initiative was communicated by the Filipino Head of State, Benigno Aquino III and the president Bachelet, who have launched together the works in order to reach this strategic goal.

“We want to begin the process with the letter of intention, to evaluate the possibilities for a trade agreement, and make it real. We are going to work hard on it, expecting being capable to start the negotiations during the next year”, sustained Bachelet.

The responsible of the General Direction of the International Economic Relations from the Chancellory, Andrés Rebolledo, confirmed that during the next February, both countries will have a meeting to begin the dialogue, all of this due to the high expectations that Phillipines has over the copper and the derivate products of this metal. In addition, other products like fruit and cellulose are going to be also consider.

Rebolledo pointed out that if the agreement is approved, it would be part of the five Asian countries that already have free trade with our nation.

In turn, both countries subscribed an understanding memorandum about cooperation on answers matters,for dealing with emergencies and natural disasters.

In turn, both countries subscribed an understanding memorandum about cooperation on matters of answers, for dealing with emergencies and natural disasters.

“Its important to mention that the Philippines is very similar to Chile because we shared an important geography, with a huge number of volcanos, we also have tectonics plates which make us similar in risks of quakes and tsunamis”, Bachelet explained.